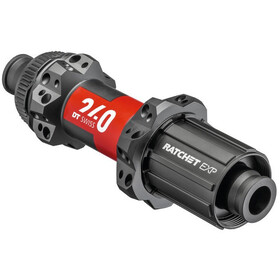 Swiss precision - from high-precision machining to perfect assembly - combined with intelligent detail solutions, have made the 240 hubs what they are today: A legend. The strengths of the new 240 hub, have been further developed with the new RATCHET EXP technology. The super reliable freewheel system ensures direct power transmission without loss. Just what athletes need: Perfect transmission of their power and absolute reliability so that they can concentrate exclusively on cycling.

Ratchet System Technology
The patented freewheel system with high-precision sprockets guarantees maximum load capacity and reliability. Thanks to the no-tool concept the system is very easy and quick to maintain.

Pressure Angle Technology
The pressure angle is the angular amount in degrees that a hub freewheel turns in neutral before it can convert the rotational movement of the crank into propulsion. The smaller the angle, the faster the leg power reaches the ground. However, it is important to know that there are limits to the minimum possible angle, as the reliability of the freewheel system is also partly dependent on the angle. What makes Ratchet System hubs truly unique is the fact that all the teeth of the two discs mesh simultaneously each time. In the case of jack hubs, on the other hand, only a few pawls engage in each other at the same time. In addition, the contact area is quite small on ratchet hubs, whereas with the Ratchet system, the entire face surfaces interlock, which ensures a much lower point load. This results in the legendary reliability of the Ratchet System hubs and also the unmistakable sound when the pulleys are turned against each other!