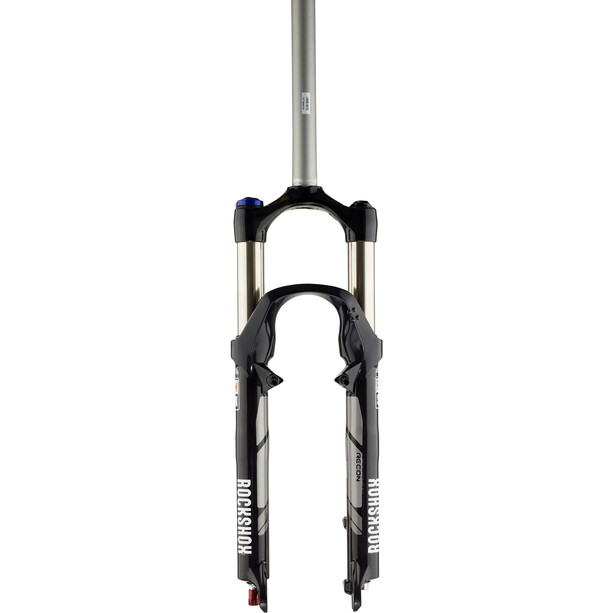 Unfortunately the desired product is currently sold out

The RockShox Recon Silver sets a new benchmark for value-based performance. Recon represents a perfect partnership between Reba’s venerable crown and lower legs and Recon’s bombproof steel upper tubes. Adopting the Reba chassis allows the design team to employ shorter upper tubes, which means the Recon Silver just went on a serious weight-loss program. And with the addition of its now-standard Motion Control damper, the re-invented Recon is the new silver standard for fun.

Air Guides
RockShox print Air Guides on all of our air-sprung forks. Maybe not a technological feat, but it will help you set up your suspension in seconds instead of minutes. And more time on your bike equals more chances to earn King of the Mountain on your favorite trail. Maybe they are a technological feat.

Maxle Lite
Who obsesses over the weight of their wheel axles? It’s ridiculous, right? It’s just a rod of metal bolting the wheels to your bike. But then again, Maxle Lite is a nifty thru axle system that makes your bike both lighter and stiffer. And less weight makes it easier to get your bike to do what you want. Especially when you don’t need to bring tools to remove it, front or rear. And that extra stiffness gives you the precision to hit your lines no matter how burly. So maybe that obsession isn’t so ridiculous after all. Now available in 20 x 110mm and 15 x 100mm sizes.

Motion Control
Imagine riding on the moon. Rolling hills, crushed rock blasted out of craters… craters. There’s no gravity so you wouldn’t even need a chairlift. Unfortunately you can’t ride on the moon. There’s lots of gnarly terrain on earth. But, earth has gravity so you’ll need suspension that climbs as well as it descends. With the Motion Control damper technology you’ll do just that.

Solo Air
Solo Air is like a Buddhist monk. Its enlightened design lets you add air to your forks through a single Schrader valve, filling both the positive and negative air spring chambers simultaneously. So they’re always in perfect equilibrium, like Yin and Yang. Giving you a plush, predictable ride you can set up in seconds, with the lightest weight air spring on the market.

Show all models from the RockShox Recon series

Hubertus
So far everything is fine.
Translated from the German To the original
Very good spring effect.

Manu
good suspension
Translated from the Spanish To the original
Good operation and performance, and comfortable in use.

Teodor
Very good!
Translated from the Swedish To the original
Very good damper for the price, I myself bought it for the use of dirt and it works very well.

Heidrun
Suspension fork
Translated from the German To the original
The new suspension fork replaced the old one, which was defective. This is great and my contact with customer service helped me a lot and went to my complete satisfaction.

Gabor
Great product for the old MTB
Translated from the German To the original
This is a really great product for the price. The only problem is that the fork's offset is 40mm, more than the usual 38-39mm. This can lead to a little more nervous control. Otherwise it's half a kilo lighter than the old RST fork it replaces, super smooth and plush (better than the Reba on my other bike) and generally the perfect compromise between price, performance and reliability. If you have an older bike that you want to revive, you shouldn't be spending any more money on a new fork - but it's definitely worth spending that much.

Joery
Recommended
Translated from the Dutch To the original
Delivered super fast, easy to set hardness.

Alexander S.
Good fork
Translated from the German To the original
I exchanged it for my 12 year old Suntour Manitou (broken). Super responsiveness. Setting the desired spring pressure also great. Unfortunately, I have to pull an asterisk off her. Because it could be a little easier, I think.

Roberto
Good product
Translated from the Spanish To the original
I have used it to improve a mid-range mtb and it goes really well  Once the rebound and pressure have been adjusted. At the moment no complaints.

brun_lionel
Item returned
Translated from the French To the original
The product seemed well made. Unfortunately his weight of 2.1kg did not suit me. I also did not use the fixtures for VBreak. The product has been returned after more than 14 days in my possession, depending on the return conditions. Very appreciable service, with my thanks.

Mickael D
Good value for money
Translated from the French To the original
Rock Shox fork of good quality. Good finish in terms of visual appearance and good impression of solidity. Easy and intuitive fork adjustment. Too bad the damper locking system does not have a precise locking point for both positions (blocked or not). Nevertheless I remain very happy with this purchase.
Rate it
By submitting your review, you accept our Terms and Conditions of Use.
RockShox Recon Silver TK SA Suspension Fork 26" 1 1/8" 100mm black
- 24 %
£260.99
£197.99
VAT included., free shipping
Add to basket
Close
Save