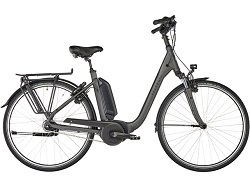 German bikemaker Kalkhoff has been making bikes for 100 years and understands what goes into making the perfect ride for touring and city riding. The company is famous for its svelte aluminium frames, clean design features and impeccable build quality – its construction process is so streamlined that even Cervelo uses Kalkhoff to assemble its high-end road bikes. Kalkhoff has taken advantage of its long history and preeminent bike designs to push boundaries within the electric bicycle market, offering some of the best e-touring and e-city bikes on the market today. Whether you need an electric assisted ride for commuting, exploring your city, or getting out for a multi-day tour, Kalkhoff has an electric bike for you.

The Advantages of Kalkhoff E-Bike Design

While Kalkhoff’s e-bikes span a range of design styles, the company specialises in adapting its non-electric touring and urban bikes to work with electric motors. With that in mind, there are a few design aspects that set Kalkhoff e-touring and urban e-bikes apart:

Kalkhoff e-bikes are rated for ranges between 40-60 km. Most of the company’s touring e-bikes are fitted with large 500 kWh batteries that can go for upwards of 50 km with the electric assist motor engaged, while Kalkhoff urban e-bikes are equipped with smaller 400 kWh batteries.

Another advantage to choosing Kalkhoff e-bikes for touring or urban commuting is that these bikes come purpose-built for those pursuits. Many of Kalkhoff’s e-bikes are built with a suspension front fork, which is ideal for dampening vibration when touring with a loaded bike or navigating potted city roads. Plus, most Kalkhoff bikes come with a rear rack so you can quickly add touring or commuting panniers to carry your stuff. Wave and trapeze frame designs also make it easier to mount and dismount your bike at stoplights and intersections.

Most bike shops only carry a limited selection of Kalkhoff bikes, and even fewer Kalkhoff e-bikes. Here at bikester.co.uk, we carry a wide range of Kalkhoff e-bikes for touring and urban riding and offer filters to make it quick and easy to find the right e-bike for you. Plus, we offer free shipping and a 100-day return policy for all Kalkhoff bikes.