Ortler Bicycles for the City and Touring 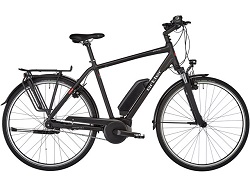 Ortler bicycles harken back to a time of simpler bicycle construction, eliminating the unnecessary components and add-ons that are now common on bikes. The German company prides itself on producing meticulously designed bicycles and adhering to the principle that less is more. For many Ortler bike fans, there’s only one way to describe these bikes: elegantly beautiful.

Ortler’s city bikes combine aesthetics with functionality. While your eye might be drawn to the unique paint patterns found on each Ortler model, the frame itself is worth taking a closer look. Ortler makes a mix of steel and aluminium frames, each of which are lightweight and extraordinarily durable. These frames are also more than capable of carrying a load, whether you’re using the bike for commuting or carrying groceries around town. The bikes are deceptively simple in design, adopting Dutch or Scandanavian styles that are highly comfortable over short distances. But paired with versatile gearing systems and efficient hybrid wheels, Ortler’s city bikes can clear most road obstacles and taking on moderate hills inside the city or out in the country. You can also choose between diamond and wave frame geometries. While aggressive riders may prefer the traditional diamond frame, urban commuters like Ortler’s wave frames because they make it easier to step over the bike when stopped.

Ortler designs its touring bikes for anyone who wants to go beyond the boundaries of the city. These bikes come fully outfitted with racks, fenders and lights so that you can set out for a multi-day tour almost immediately. What truly sets these bikes apart is the price point – it’s possible to get a high-performing trekking bike for well under £1,000, which isn’t the case for most other manufacturers. As for Ortler’s city bikes, touring bikes are available with both diamond and wave frame geometries. However, you’ll notice that Ortler’s trekking frames are slightly more aggressive and that most frames are made from aluminium. In addition, while Ortler touring bikes are still stylish, they lose some of the vintage feel and unique paint patterns of their urban counterparts.

Ortler has also paired its traditional-looking bike designs with new electric assist technology, making it easier than ever before to get around your city or explore further during a tour. All Ortler’s e-bikes use powerful Shimano motors, which minimise resistance while offering best in class battery life. Ortler did make some additional modifications to its existing bike designs to better adapt them to the electric assist technology. For example, you’ll find that most e-trekking bikes are equipped with disc brakes to provide more stopping power. Many e-city bikes also come with integrated front and rear lights to help you be seen by motorists.

Finding a bike shop that carries a wide range of Ortler bikes can be quite a challenge. But here at bikester.co.uk, we have a huge selection of Ortler city, touring and electric bikes. Our simple filters make it easy to find the right Ortler bike for your next adventure. Plus, we offer free shipping on all Ortler bikes and a 100-day return policy.