Mid-Season Sale - save up to 60%
30 DAY RETURN POLICY
FREE DELIVERY FROM £991
FAQS & HELP HERE
Brakes & Accessories
The speed you can achieve isn’t worth a thing without a good set of brakes on your bike. Only the right brakes can create the kind of control and riding dynamics that allow you to master whatever the world throws your way. Apart from the classic coaster brake, we mostly differentiate between rim brakes and disc brakes. Both systems provide good braking performance in dry conditions. However, disc brakes are superior in terms of the maximum power they offer, particularly in wet conditions. Which type of brake fits your bike depends on the mounts on the frame and fork. Converting from rim brakes to disc brakes takes a lot of effort and also requires, at the very least, new wheels. But whatever type of brake you have, the same rules apply: brake blocks, pads and discs, callipers and cables are all wear parts that need to be regularly checked and replaced to ensure safe and consistent performance.
Carry on reading

To make sure your bike is in good working condition there’s a few checks you’ll need to make from time to time. These include, amongst others, checking the pressure of your tyres, the condition of your wear parts and your chain. But by far the most important components to keep an eye on are your bike brakes. No other singular part has as big an impact on the safety of your ride as your brakes do. 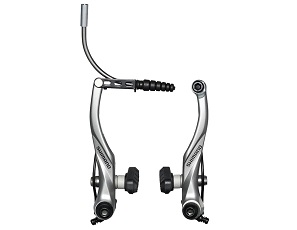 As most people know, brakes are used to slow down or completely stop a vehicle. In the UK, by law, each bicycle must have two independent braking systems. Otherwise, the bike isn’t allowed on the road. A distinction is made between radial and axial braking mechanisms. Radially engaging brakes act in the direction of travel - e.g. drum and boom brakes. Axially mounted brakes are usually associated with disc or rim brakes. The latter design is the most common on today's bicycle models. There is another differentiation factor however – the point of application of the braking surface. So, we also differentiate between rim and hub brakes. The latter category includes, for example, the very popular disc brakes.

For the best braking power, you don’t just need high-quality brakes installed by well-known manufacturers, you also require clean assembly and professional adjustment of the braking devices. It’s important to only install your brakes yourself if your familiar with how to do it properly. Otherwise, it’s better to head to a specialist workshop to get them fitted.

The right technique is also crucial for optimum braking. Always apply both brakes at the same time and be careful not to overheat the brakes. During longer rides it’s advisable to release the brake lever briefly, before pressing it again. This gives your brake pads the chance to cool down a little. At very high speeds, it’s also advantageous to straighten you upper body in order to take advantage of air resistance. The higher the speed, the higher the air resistance – and subsequent braking effect. Wet ground also favours a slower braking force, since the brake pads must first displace the film of water on the surface you’re crossing. Strong overheating can lead to so-called brake fading, which can occur especially with small disc brakes. Fading in this case means a reduction in the braking effect. In addition, a deformation of the rim can occur, and in the worst case tyre damage may lead to tyre ruptures.

The next section describes the most important types of bicycle brakes available on the market today, and the advantages and disadvantages of each:

Rim brakes are the most widely used kind of bicycle brake – especially for road bikes. There are basically two different types: systems with one mounting point or systems with two mounting points. In road racing, the first type is preferred due to its low weight. A disadvantage of the rim brake is the wear on the rim. If the brake pads are installed incorrectly, even the tyre can be damaged. In addition, they offer a poor braking performance in wet weather.

Disc brakes are a relatively young design compared to the others. They are mainly used in mountain biking. Their high braking performance quickly made the disc brake popular, as even when wet, this design offers considerably better braking torques. In addition, the brake pads last significantly longer and can’t damage the tyre because the braking force acts directly on the hubs. For this reason, the rim can’t overheat or wear. The disadvantages include a slightly higher weight as well as a stronger tensile load on the spokes.

Even if the V-brake was originally merely a brand name of the brake manufacturer Shimano, the term caught on as a name for the actual cantilever brake. Today, the V-brake is popular with mountain bikes. Compared to conventional rim brakes, the V-brake offers better braking force distribution on the rim.