Roll through life on your Dutch bike. Comfort is king here – not hectic activity. Enjoy the nostalgia of traditional lugged-steel frames. The low entry and high-adjustability of the handlebar and saddle ensure that almost every rider can enjoy a comfortable fit and upright seating position. The equipment of these Dutch bikes also follows tried and tested patterns. As a rule, manufacturers rely on a combination of hub shift, brake pedal and fully closed chain case. Instead of the lateral dynamo of today, a hub dynamo usually operates the lighting system, but this concession to modern technology is a welcome one. Their great popularity in the cities clearly shows that the classic Dutch bike model is far from ready for the scrap-heap yet. 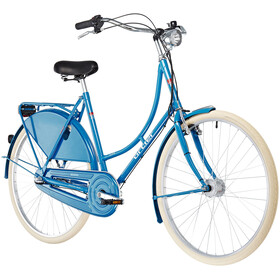 Dutch Bicycles for Commuting in Comfort and Style The Netherlands is famous for its cycling culture. Their city streets are filled withbeautiful, unique urban bikes, optimised for comfort as well as a traditional aesthetic. Whether you’re looking to add comfort to your commute or to ridearound town in style, bikester.co.uk has a Dutch bicycle for you.

What are Dutch Bicycles?

Dutch bicycles are a style of urban commuting bikes that have been used in the Netherlands for decades and have grown in popularity in cities around the world. These bikes have a surprisingly tall frame, which allows the rider an excellent view of the road in front of them. Better yet, many Dutch bicycles feature a step-through frame that allows you to swing a leg over no matter how formal your work clothes are.Traditional Dutch bicycles were mainly single-speed bikes with steel frames – there are few hills in Dutch cities, so there was little need for adaptations for climbing and descending. In the same vein, most Dutch bicycles were made with coaster brakes rather than rim brakes.You can still get Dutch bikes with those features, but they’re no longer a requirement. Today, you can find Dutch bikes made from aluminium to reduce their weight, as well as options for gearing. Coaster brakes remain popular, but roller brakes and V brakes are also available for many models.

How to Choose a Dutch Bicycle?

When choosing a Dutch bicycle, you’ll want to blend the original style of these bikes with the requirements of the city where you live. Remember that theNetherlands is flat – if you live in a hilly city, a heavy steel frame with no gears may not be all that practical. In that case, you’ll need to find a Dutch bike with a few modern adaptations.On top of that, there are a few other things to consider:

Dutch bicycles can be hard to find at your local bike shop if you’re outside the Netherlands. But here at bikester.co.uk, we carry dozens of Dutch bicycle models. No matter what modern adaptations you need to your traditional urban bike, wehave a Dutch-inspired ride for you.