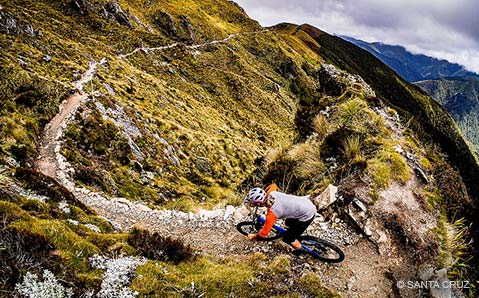 Santa Cruz Bikes - Quality bikes since 1994
If the name Santa Cruz summons images of skateboards in your mind, you’ve either not been bitten by the MTB bug or have been trail-hunting in the deepest, darkest wilderness for the last 20 years. Santa Cruz Bikes have been producing high-end mountain bikes for years now and have earned themselves a well-deserved cult following. The no-longer-little bike brand is based in wheel and surf-crazy Santa Cruz, California and was originally founded in 1994 by ex-skateboarding pro Rob Roskopp. From the outset, Santa Cruz dodged the hardtail trend and focused on the Fully. With elaborate carbon frames, refined VPP suspension, three wheel sizes and the highest attention to detail, Santa Cruz has its own idea of the perfect tool for real CC, trail, all-mountain and downhill bikers. Countless magazine tests, race results and loyal customers justify Santa Cruz’s vision.
Carry on reading 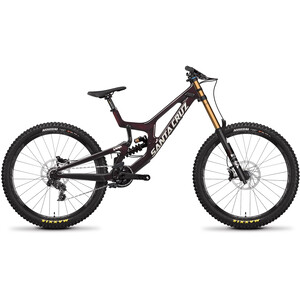 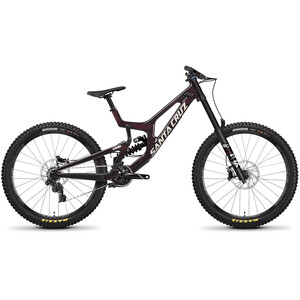 California-based Santa Cruz has been making high-quality mountain bikes for over 25 years, leading the industry in cutting-edge innovation and pushing the boundaries of what a mountain bike can offer. Santa Cruz bike are immensely popular amongst recreational riders, racers, and bike critics alike. With a capable range of full-suspension and hardtail mountain bikes, there’s a Santa Cruz mountain bike for every style of rider.

One of the technologies that Santa Cruz pioneered in the early 2000’s and which remains on many of the company’s full-suspension mountain bikes today is virtual pivot point (VPP) design. VPP uses counter-rotating links to provide a smooth ride without reducing your bike’s efficiency. Better yet, VPP suspension systems can be widely adjusted for use in both downhill and cross-country bikes.

Santa Cruz is beloved in part because the company makes carbon frames affordable for the recreational rider. The company offers two different types of carbons in its frames, C and CC. Carbon CC frames are found on Santa Cruz’s high-end racing builds. It’s an expensive frame material, but these carbon frames are lightning fast and highly responsive when every bit of efficiency matters. Carbon C frames are Santa Cruz’s more affordable carbon build. The weight gain in C frames is negligible for most riders – less than half a kilogram per full suspension frame – making this one of the best carbon frame designs for the money.

Santa Cruz doesn’t build tens of bike styles and throw them all out for riders to choose. Instead, the company puts intensive focus into just a handful of full-suspension bike models and even fewer hardtail mountain bike models. These models cover the range of riding styles and can be built from the frame up to customize them according to your needs.

Most Santa Cruz bikes come in two standard builds: a R-kit and a D-kit. The R-kit is the premium build, with higher-end components throughout the drivetrain. More important for most riders, the R-kit also comes with a slightly more durable and efficient suspension fork from Fox, compared to the basic RockShox fork in the D-kit. Particularly for cross-country riders, the up-front cost for an R-kit Santa Cruz model is well worth it over having to upgrade down the road.

One of the major differences between mountain bikes in Santa Cruz’s full suspension lineup is the wheel diameter. The 5010, Bronson, and Nomad models are built for 27.5-inch wheels, while the Tallboy, Blur, and Hightower models are built for larger 29-inch wheels. Which wheel diameter is best for you depends on the your riding style and the terrain you typically ride.

The easiest way to start riding a mountain bike from Santa Cruz is to shop our selection at bikester.co.uk. We carry most of Santa Cruz’s lineup of full-suspension and hardtail mountain bikes, as well as offer full suspension frames so you can customise your build.